ACPC: More Engineering Seats to Remain Vacant in the State

In a recent event, Gujarat Secondary and Higher Secondary Education Board (GSHSEB) has released the results for class 12 Science stream and it was shocking to see that even this year only fewer students have qualified in Group A (with Mathematics) which is not much of improvement from last year. After the result is declared Admission Committee for Professional Courses (ACPC) are expecting a large number of seats to remain vacant, even in top colleges this year. This year after the introduction of EWS category admissions in the colleges of Gujarat state, ACPC was expecting a large number of applications but class 12th Result came as a shock to them and now it is evident that a good number of seats will remain vacant.

Last year, when the result was announced a total of 44, 000 students had cleared Group A examination and approximately 38, 000 students were eligible to apply for various undergraduate professional courses registered under ACPC. The authority was however not overwhelmed with the total number of applications received as even after completion of ACPC Selection Procedure approximately 34, 000 seats remained vacant.

This year the matter is more concerning as there is inclusion of 10% quota for candidates applying under Economically Weaker Section (EWS), after quota the total number of seats now is 66, 000. Now, if we see the result of higher secondary exam, this year, 38, 948 students qualified the examination under Group A. ACPC is allowed to conduct admission process for only 75 percent of total available seats and the remaining 25% seats are under the authority of colleges and admission to these seats are done under management quota.

Member Secretary of ACPC, Mr. G P Vadodaria shared his concern and said that “However, the number of eligible candidates to apply for admissions are nearly 40, 000, there will be many who will prefer going for National Institutes like IITs and NITs, some even may choose to go to a different state for further education, So increasing the total number of seats are only going to result in increased number of unclaimed vacant seats”.

As estimated by the officials it is estimated in engineering courses in particular there is high possibility of approximately 35, 000 seats remaining vacant. The experts however feel that with more number of seats there is a surety among students of getting admissions if they apply also with increased number of seats in each course and Colleges under ACPC, the possibility of a student getting the desired course and colleges increase too.

Talking about the positive side of the scenario, Mr. Rajul Gajjar, Dean of Vishwakarma Government Engineering College said that “the vacant seats is not a bad news, as per All India Council for Technical Education (AICTE); the colleges with 30% or more vacant seats go for scrutiny and gradual closure and that will affect the not so good performing colleges and at the end of the year we will be left with only better performing colleges. ACPC Asked Students and Parents Not To Fall for the Admission Trap by Paying Huge Admissio ... Read more 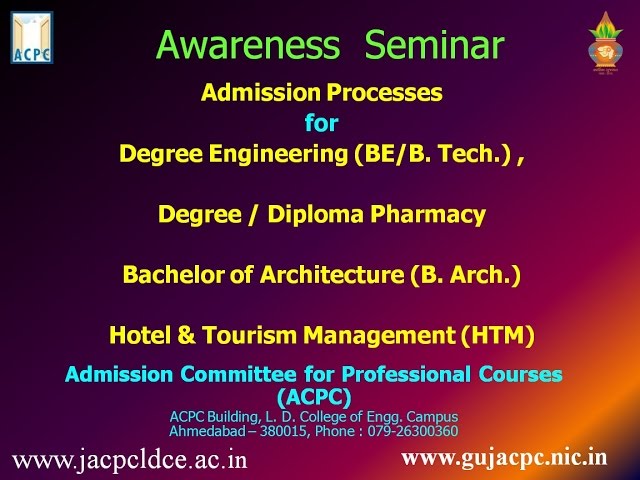